May 15, 2016
“For the survivor who chooses to testify, it is clear: his duty is to bear witness for the dead and for the living. He has no right to deprive future generations of a past that belongs to our collective memory. To forget would be not only dangerous but offensive; to forget the dead would be akin to killing them a second time.” - Elie Weisel, Night

Today we visited Auschwitz. It is hard to put into words what we felt and experienced. The Holocaust is something we have all learned about in school for a long time, and a couple of us have visited the Holocaust Museum in Washington D.C. and read memoirs written by survivors.  This experience, however, was much different because instead of learning about something that happened in another country before we were born, it was something that happened on the ground we were standing on.

Going into the day, we expected the visit to be emotionally difficult but were surprised at how distant we felt. Even though it was right in front of us, what happened in the past felt detached from the present. It was hard to put ourselves in the shoes of those who passed through the camps, as prisoners or as part of the SS. When we first got to Auschwitz, we stood in the parking lot waiting for our tour and there were lots of people talking and laughing. It was strange to go from that to a somber, serious moment.  When talking about this later, we decided that there should be a better transition between our present lives and the tour of the camps.

As we approached the entrance of Auschwitz I, we had to go though a metal detector, similar to ones at airports. People were clustering around their tour guides or waiting in line to collect their headsets offered in a variety of languages. We first crossed the railroad towards the prison blocks, where we passed under a metal arch that read, "ARBEIT MACHT FREI", which translated into English is, "Work sets you free".

From the beginning of Auschwitz, the conditions were very harsh. Cruel punishments were developed for prisoners who got out of line. Most of these punishments took place in Block 11. Standing cells were designed to restrict movement, while those in starvation cells were left in small, dark basement cells without food or drink until they died. Quiet cells were created to deprive prisoners of air, thus leaving the prisoners to suffocate to death. The most famous story that took place in this building is about a Catholic priest, Father Maximilian Kolbe, who volunteered to take a man's place in the starvation pit. In July 1941, a Nazi officer selected a group of prisoners to die a painful death by starvation. Some prisoners attempted to escape however, the Nazi officials retaliated by killing anyone who tried to escape.  For every successful escapee (of which there were very few) ten prisoners were executed. One of the men selected to die in the starvation pit pleaded not to be the one who was killed because he had a family. Father Maximilian Kolbe, a Roman Catholic priest, asked to take the man's place. Uncharacteristically, the Nazis allowed this exchange. Most prisoners could not withstand the starvation pit for more than a few days, however, the priest never despaired or fell into bitterness. He encouraged other prisoners until he alone was the only one in the group left alive. Finally, tired of waiting for him to die after two weeks without food or water, the Nazis killed him with a lethal injection. In Auschwitz I - designed to hold 20,000 prisoners - we saw the general layout of the camp as well as some of the belongings of the victims. We also saw the first gas chamber.

After finishing the tour of Auschwitz I, we took a shuttle bus to Auschwitz II - Birkenau.  This camp was much larger, able to hold 200,000 prisoners in 300 barracks by the time the camp was liberated.  We could not even see the end of it.  We saw the ruins of the gas chambers that were bombed just four days before the Russians entered the camp because the Nazis were trying to cover up what they had done. Beside these ruins, there stood a memorial that was commemorating all of those that had died in the camp. 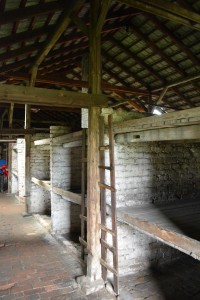 We also got to see inside a barrack that the prisoners slept in. Because the buildings are heavily deteriorated, only two of the barracks were open to visitors. The camp was built very quickly and most of the buildings have no foundation and the walls are very unstable. The barracks were built with bricks taken from the houses that were torn down in the village, and some prisoners were forced to build the barracks, while others were forced to work in munitions factories or do other work that enabled the camp to continue. In barracks like this one, 700 people would be crammed into bunks, with five or six people on each of the three levels, the bottom level being on the stone floor.  Imagine sleeping on the stone in winter in below freezing temperatures in a thin prison uniform that resembled pajamas, with nothing to keep you warm...

The most impacting part of Birkenau was the railroad. There was only one way in and out of the camp, and it was by train. The trains pulled in and stopped on the platform, where their "cargo" of prisoners would be unloaded. Under the view of numerous watch towers, prisoners would be separated by gender and health. The elderly, ill, and infirm were sent straight to the gas chambers It was hard to imagine being on the platform where prisoners saw their family members for what was probably the last time.

After we were done with the tour of Auschwitz, we went to Daniel's church for dinner and youth group.  Our original plan for dinner was to order pizza and eat it before youth group started. However, as the teens showed up one by one, our plans changed. We all ate dinner together around a table, enjoying pizza, sandwiches made out of cold cuts, and a variety of juices. After eating, we all piled into another room where Dr. E talked about discerning God's will for our lives. Daniel's son, Tymo, translated his lesson to the rest of the teens.  Dr. E had the youth discuss topics, volunteer to answer questions, and do things in an "American style" (much like at the university).  Polish children are not used to critical thinking strategies because their schools require that one memorizes information without learning how to apply it.  After talking with some of the kids and cleaning up, Daniel took us to get ice cream from the Polish version of Aldi's ("Lidl").

Overall, today was a roller coaster of emotions and we all have a lot to think about. Processing our visit to Auschwitz is difficult, but Anne Frank once said, "I don't think of all the misery, but of the beauty that remains." We cannot forget the horrors of the Holocaust; we cannot forget the lives it took or the evil that played out. However, we can move forward in remembrance and do our best to fight and prevent this type of evil as we use the lessons learned from this event in history to shape our decisions in the future.