Fellowship, Food, and Laughter... LOTS of Food... and LOTS of Laughter

May 15, 2016
The students are busy preparing their presentations that will be used for the next three days as we work with primary, middle school, and university students, so they asked me to write today’s blog.  Today was filled with fellowship, food, and laughter.  We left the hotel at 9:15 and headed to church, where we made our traditional Polish breakfast of cold cuts, cheese, bread, jam, coffee, tea, juice… and Karleigh’s staple of banana with crunchy peanut butter.  After cleaning up our dishes, we enjoyed the service at the church that Daniel leads.  About 80 people pack into a small room.  Everyone shakes hands with everyone else when they enter the small room used for worship.  Daniel and three other people led the music, some of it familiar in melody, but none of it familiar in words!  Carrie and Jordyn said that they could sing the English tunes to a few songs, and all four of them kind of stared at the to-us-largely-indecipherable Polish words.

There are several parts of the service where people in the congregation spontaneously pray in between songs.  And then Daniel gave a sermon about needing to lead a life pleasing to God rather than just seeing salvation as if it is a ticket to live however we want.  (That is a short summary of a long sermon that had a ton of bible verses.  However, the Malone students didn’t understand a word of it, and I got it by running translation since I was sitting next to Mateusz whom I met on a previous trip here.)

After church, we went to Daniel’s house where we ate a three course meal prepared by Goshia that stretched over two-and-a-half hours, comprised of a noodle and carrot soup in chicken broth, fried chicken cutlets, baked seasoned chicken, cucumber salad, juice, and the most amazing meringue custard cake that Jordyn swears will be in heaven.  This is an old-world culture, so the children eat in the kitchen while the adults gather around the table.  Goshia split her time between cooking, caring for the kids, and being with us.  It's interesting to think about how much culture is wrapped up in the eating of food. 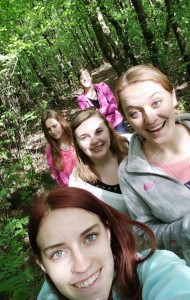 After our long, filling, wonderful lunch, we went for a walk with Daniel, Goshia, Jeremiaz, and Martyna, while Julia and Tymo were off with friends.  We wandered along paths that run through a nice wooded area behind their home, and exchanged some gifts that we had brought with us for Daniel’s family.  And then we went to Asia’s house for a cookout!  So, less than two hours after finishing a huge lunch, we were eating barbequed pork steaks, two kinds of sausages, chicken skewers, two kinds of salads, huge pickles (Daniel at an entire BOWL of pickles, and Karleigh wasn’t far behind!), and ANOTHER dessert (an apple cake).  Dinner was filled with much laughter and story telling, both by Poles and Malone students, sometimes with translation and sometimes independent of each other.

Daniel has picked a few unique ways to remember the students' names (alternating between singing Styx remixed as "Carrie Ann my wayward son" or "John Kerry", and "Michael Jordyn" - apparently "Sarah" is a Polish-enough name and "Karleigh" doesn't lend itself to a song or famous person association).  I don't think I have ever heard so much laughter!  Sarah (yes, deceptively quiet Sarah) has this contagious laugh that comes out of nowhere, and ripples through the group, bringing Jordyn to tears at least once because she was laughing so hard.  And then, there are endless inside jokes, and a simple glance can lead to a chorus of laughter.

After dinner, Asia laid out our plans for the next three days, so after returning to our hotel, we spent a few minutes debriefing from the day, and Carrie, Jordyn, Karleigh, and Sarah are now working on their presentations.

I had hoped to post a hilarious video of everyone laughing in the car, and Daniel giving his humorous take on how much he likes being with our group, and a somewhat bashful Tymo enjoying spending time with his new friends, but the file format wouldn’t upload.  Suffice it to say, though, that I think this group set the record for being the one that has laughed the most of any group I have brought here in the last twelve years.  In a short time, it has been obvious how much these young women have bonded together, embraced new people and a new culture, and are allowing themselves to be shaped by this experience.

Wishing you all a wonderful Sunday of worship, Dr. E.
2016 Malone Team